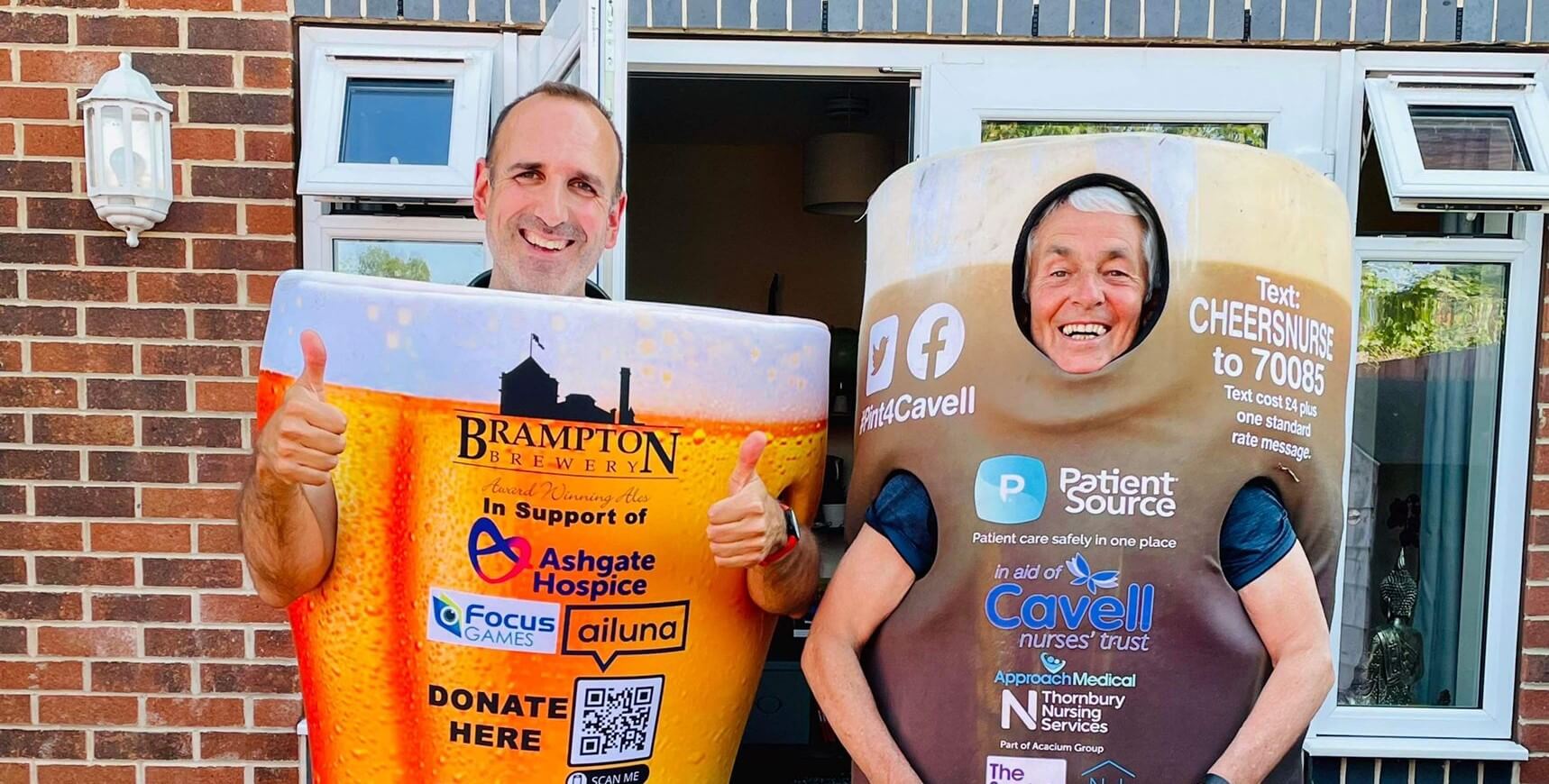 A nurse is challenging himself to break a unique running world record in support of Ashgate Hospice – by running the London Marathon dressed as a pint of beer.

Joan Pons Laplana, from Chesterfield, is hoping to become the fastest man to ever complete a marathon dressed as a pint on 2nd October.

As Ashgate’s care has only a third of services funded by the Government, the 47-year-old wanted to do his bit to help raise funds for the North Derbyshire charity.

We’re proud to bring you his #Pint4Ashgate story in his very own words below: 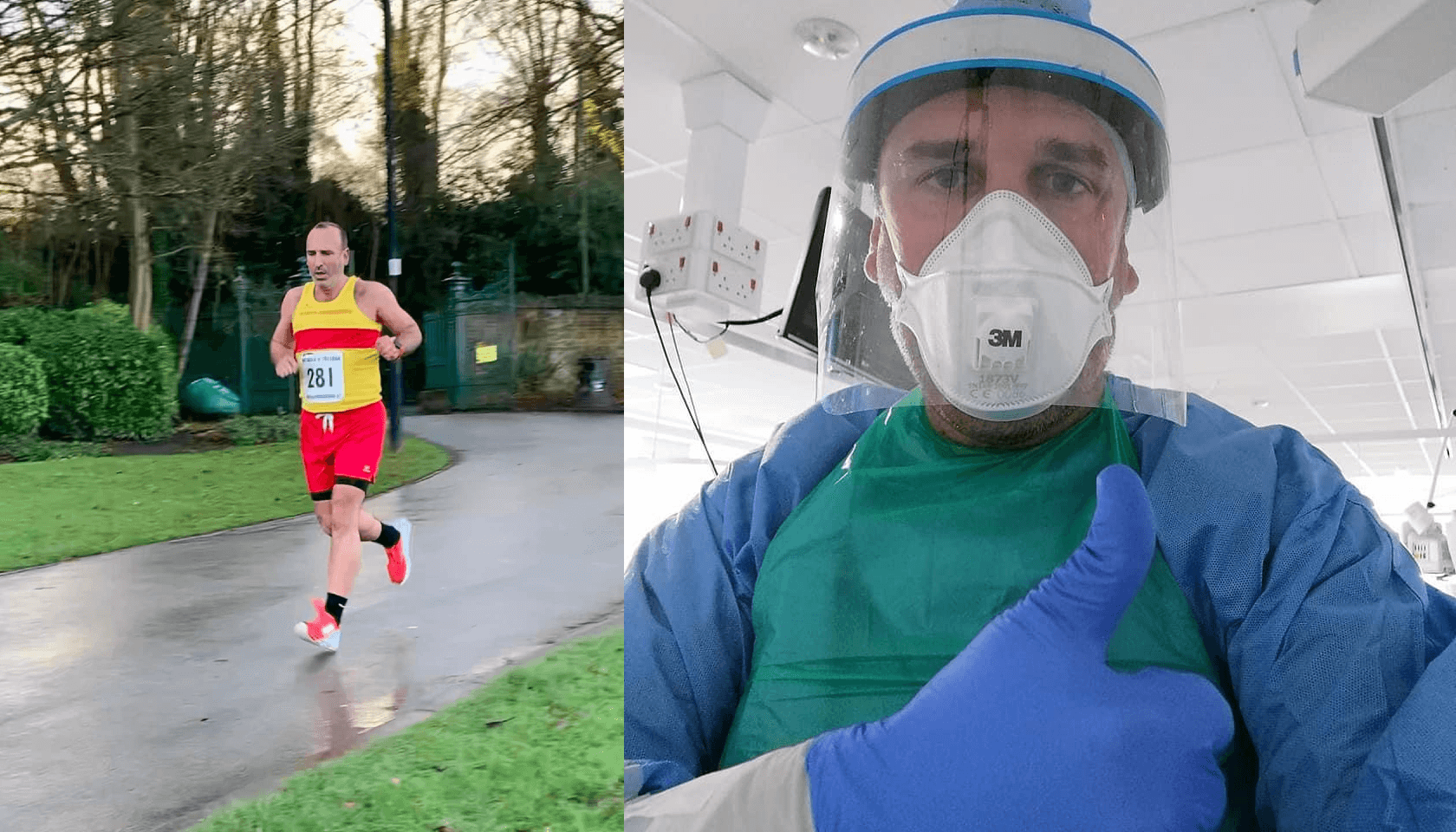 It’s been just over a year since I was diagnosed with PTSD following my redeployment to work as a nurse during the COVID pandemic.

The world around me was crumbling and I was struggling with my mental health. I was already on medication for my anxiety attacks and the next step was to start antidepressants.

But as a last resort before taking more pills, my therapist suggested trying out running. I was quite overweight and the thought of running horrified me but I decided to give it a go.

Most people start with the couch to 5k programme, but not me! I decided to do couch to marathon in eight months. To motivate myself, I put my name down to run the London Marathon for Cavell Nurses Charity.

First time I tried to run I only lasted less than a mile; I thought I was going to pass out. My heart was pounding, and I couldn’t breathe properly.

The worse part was the following morning when I tried to get out of bed – every inch of my body was painful. I could barely move. 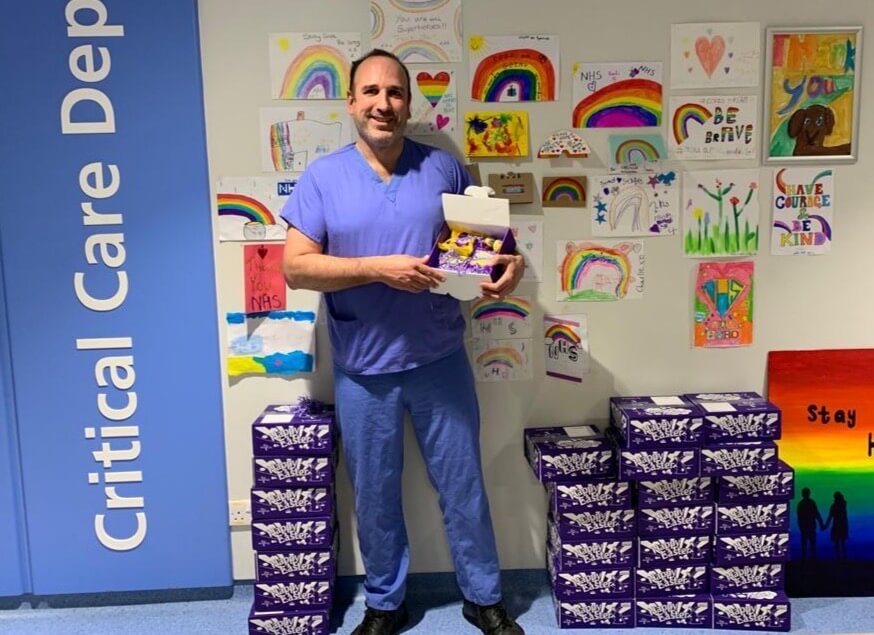 Joan works as a nurse

I had a couple of days rest and I tried again. This time I ran a bit further. Then after a week I noticed something that I hadn’t managed to do for a long time: I was sleeping for eight hours. My body was so tired that I slept all night through. For the first time in months, I was not waking up in the middle of the night from nightmares.

Running broke the vicious cycle. Because I was rested in the morning, I was able to concentrate more. My mood swings improved and suddenly I felt better.

The first time I managed to run 5k was exhilarating. It took me nearly 45 minutes but reaching 5k was a moment of euphoria and pride! My body was broken but my spirit was healing.

When the restrictions were lifted at the end of March 2021, the first thing I did was to join North Derbyshire Running Club. That ended up being one of the best decisions I made in my life.

On days that I felt down, the support from my fellow runners was tremendous. It didn’t matter that I was struggling at the back or that I couldn’t run uphill, they were always there with words of encouragement.

Then a friend randomly suggested dressing up for the London Marathon – and trying a Guinness World Record! I found the idea quite intriguing, and I started to do my research. When I discovered that nobody had the Guinness World Record for the fastest pint of beer, it was like a eureka moment! 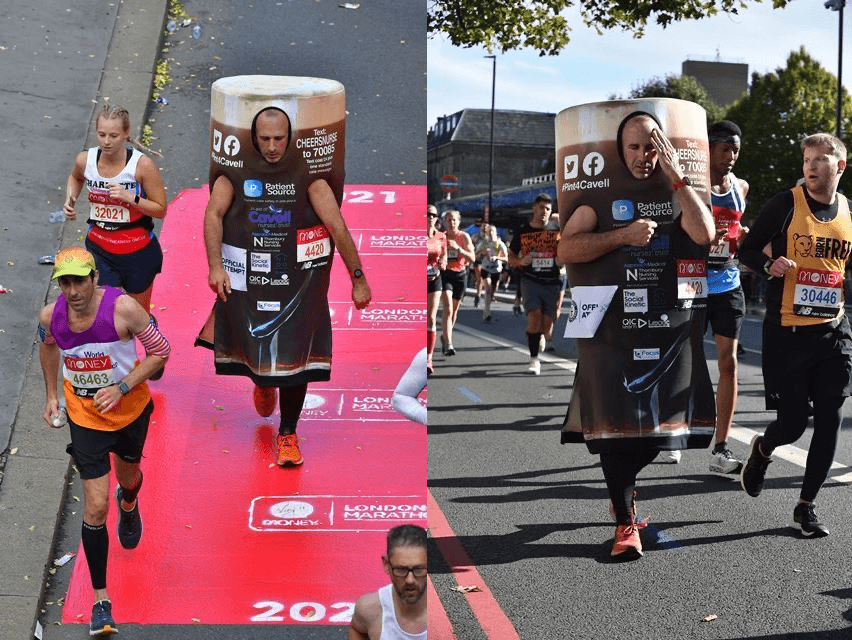 What I didn’t know is that Guinness World Records have a minimal standard and to be the fastest pint in the universe I needed to finish in less than four hours.

Running become a bit of an obsession and I entered a few races locally. As preparation for London I ran the Sheffield Half Marathon 2021. I was euphoric when I managed to cross the line in two hours and four minutes! Suddenly I thought that my dream of completing the marathon in under four hours was possible.

My first attempt at beating the Guinness World Record at the London Marathon didn’t go to plan, but I felt on top of the world. The closer I was to the finish line, the louder the crowds; plus, the encouragement was fantastic. I felt like I was winning the race.

I managed to go from couch potato to completing a marathon in eight months. Thanks to running, I was also winning my battle with PTSD and on top of that I was five stone lighter and a lot healthier.

As the New Year came and went, I continued to get faster. Then someone asked me if I was going to try the record again. My initial reaction was: “no way, Jose!” …but somehow it made sense. I had already done the hard work and transformed my body.

The four hours target didn’t seem that impossible and after a few weeks of deliberation I decided to try again.

On 2nd October 2022, I will attempt to beat the Guinness World Record as the fastest pint to complete a marathon!

This time I have decided to support Ashgate Hospice whilst taking on the challenge. Ashgate is my local hospice, and I became aware that hospices across the UK only receive about a third of their income from the UK government and the rest from the public through donations and fundraisers. I want to do my bit to help.

Ashgate Hospice is a unique and special kind of place that supports families who are experiencing an advanced life-limiting illness.

I’m hoping to raise £5,000 in total so Ashgate can be there to support patients and families on its Inpatient Unit and out in the community.

My first race with my newly designed costume will be on 22nd May at the Manchester Half. In preparation for the marathon, I will be doing other races over the summer.

You can follow my journey to become the fastest pint in the Universe. I am on Strava and using #Pint4Ashgate on social media.

And if you wish to support my crusade please donate here. 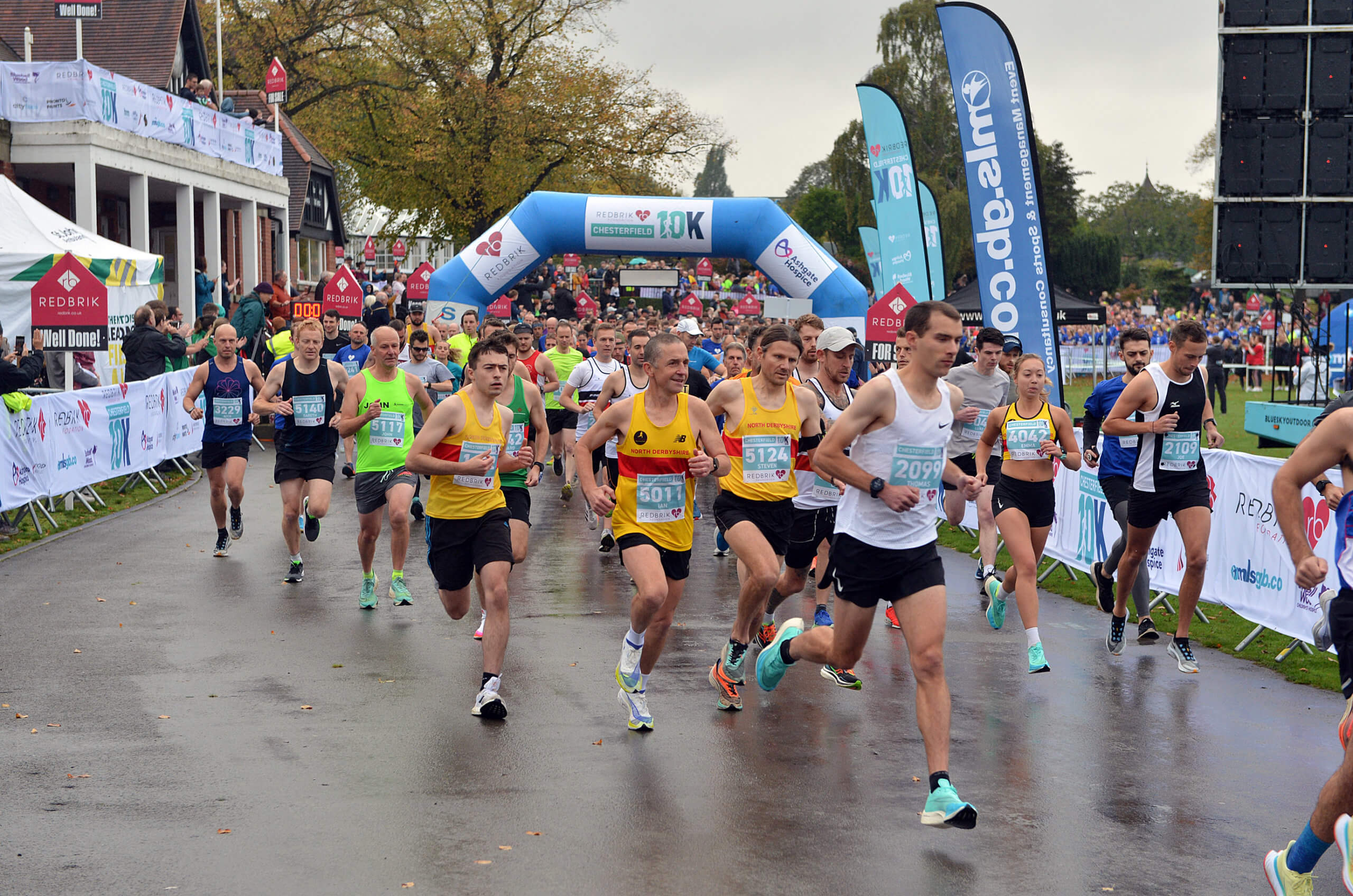 A 10k race centered in the heart of Chesterfield. You’ll run past Chesterfield’s major landmarks, including the town’s famous Crooked Spire, all whilst raising money for Ashgate Hospice. 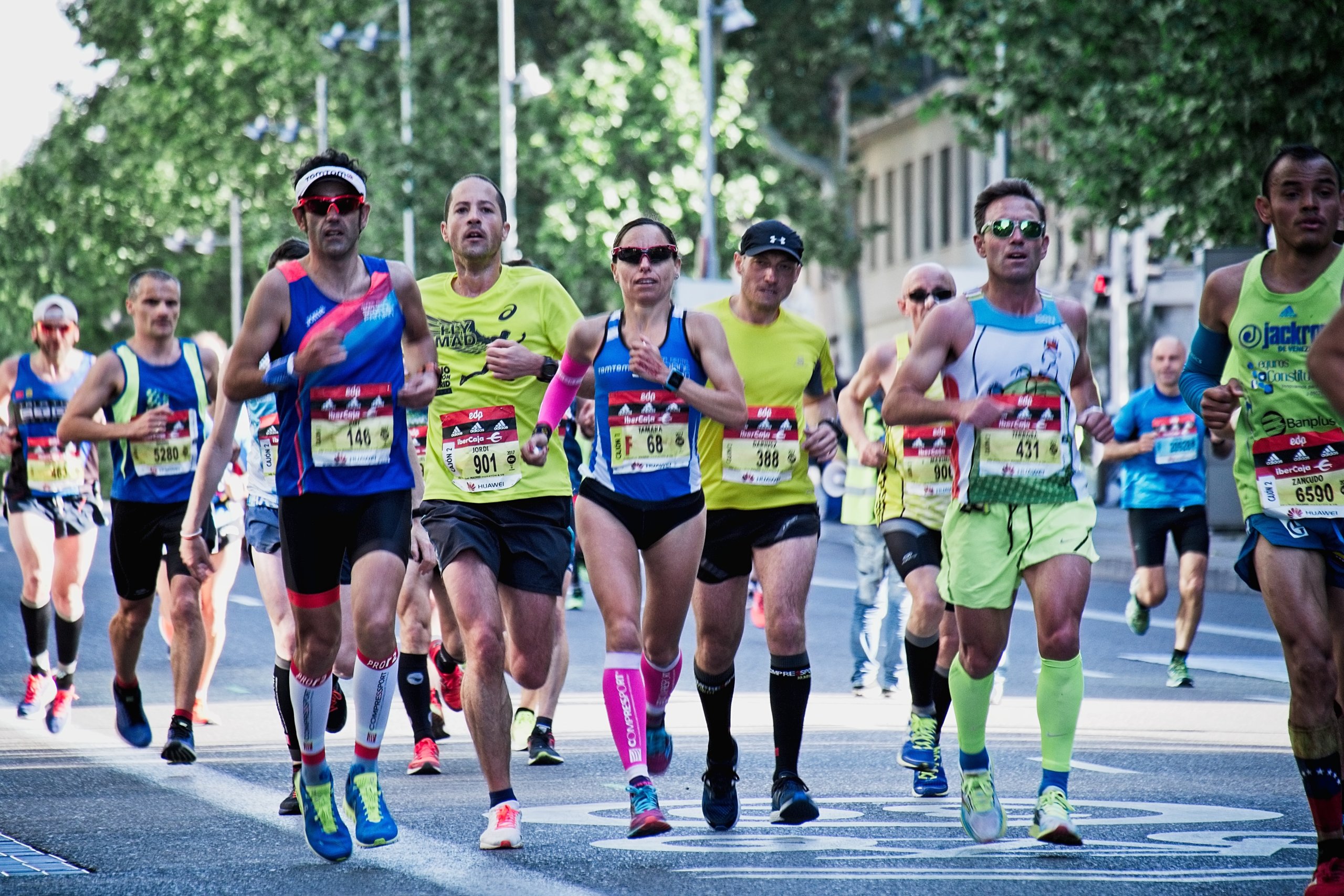 Join 57,000 other people and run the biggest and most iconic half marathon. Famous for its warm North East welcome, you really will feel the community spirit whilst running the race.

Find out more
We use cookies on our website to give you the most relevant experience by remembering your preferences and repeat visits. By clicking “Accept All”, you consent to the use of ALL the cookies. However, you may visit "Cookie Settings" to provide a controlled consent. To learn more about how we handle your data, please view our Privacy Policy.
Cookie SettingsAccept All
Manage consent